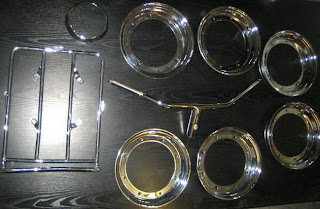 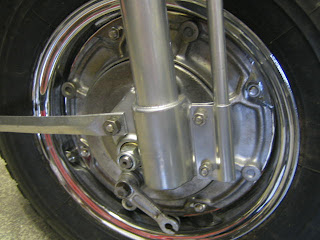 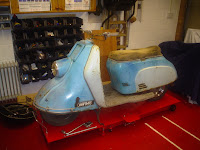 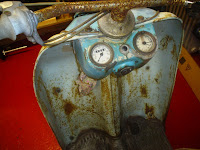 In 2008 i sold my beloved 1961 heinkel tourist 103 A1 scooter and in with the deal i acquired a very sad looking 1956 heinkel tourist 103 AO scooter with original registration document and some repair bills from the 60s.The scooter needed extensive restoration and had not been used since 1983, The deal also included a complete spare engine with a broken crank. In hindsight i was not really that bothered about selling my A1 because i did receive the same money i paid for the scooter 12 months earlier ,so the AO project cost me zilch. On collection day the buyer came down from the northwest of England to collect his A1 and to my surprise stuffed in the back of his very small car laying on its side and looking very sorry for itself was my 1956 heinkel tourist 103 AO Restoration project .(with the spare engine my i add). I just wondered how i was going to get it out of his car, as it was squeezed in very tightly but we managed to prise it out eventually, not without leaving a rather large oil slick in the back if his car (oops). After pushing my heinkel AO into my workshop i sat and looked at it and thought to myself were should i start on this near basket case of a scooter, she had already been partly dismantled as the speedo and clock housing was hanging down, the grips and cables had already been taken off and put into a box,the seat(what was left of it) and spare wheel rack were also dismantled. After taking off all the tinwear including front fender, legshield, rear engine cover and inspected the engine, everything looked complete although everthing was covered in surface rust. The exhaust looked to be the original one from 1956 and was completely beyond repair and full of holes, but i will put this to one side in case i need a pattern for a new replacement, i must point out that these early AO exhausts differed from the later A1 and A2 exhausts as they have two tailpipes welded together and a secondary metal heat shield built over the main silencer box to stop the rear tinwear getting a hotspot, but saying that the later A1 and A2 exhausts will fit these earlier models if you don't mind straying away from originality. I then removed wheels and then lifted her engine out. I am not sure of the condition of the engine although compression is their and she has a genuine 23,300 miles recorded on the speedometer. Next step was to gather all the items for re chroming which were the handlebars, headlight rim, spare wheel rack and three split rim wheels and shipped them off straight away to be re chromed at a cost of £400 including shipping. Next was to gather all the parts that i needed to send for sandblasting including frame, front forks, petrol tank, main stand, front and rear inner mudguards, engine cowlings, air filter box etc and then hurriedly get them over to the powder coaters before oxidisation set in. I decided on a cream colour for the powder coating and titanium silver on the stand and inner mudguards, foot brake etc. The eventual paint finish on the tinware when i have decided on the colour with be a traditional cellulose finish.
I decided to purchase a proper heinkel engine maintenance stand which i am finding much more practical as it allows you to rotate the whole engine while you work on it. I purchased this new from a guy on ebay germany at cost of about £120 including shipping. First i drained the engine oils and then removed the rocker cover, then i removed the cylinder head, rocker arms,and push rods. The barrell was removed to reveal the piston which looked in reasonable condition considering it has covered 26,000 miles with just a few areas around the compression rings showing evidence of escaping gases, the cause of this is possibly a case of worn compression rings. I then removed the valve springs and valves from the cylinder head, all the items i had removed i placed in a large container of degreaser for a few days to try and loosen some of the carbon and gunk from the cyclinder head ,piston and rocker cover , valves ect.
Posted by HEINKLE TOURIST CRAZY at 12:28

Hello Paul
I have subscibed to your feed and I am following your blog. I have a Heinkel Tourist and a Durkopp Diana to restore - both in bits. It's going to take me a long time and I have to learn about scooters too. So whatever you publish will be of interset to me.

Hi Paul. I thought I recognised your name. I saw your restoration photos on the North American Heinkel site. As I'm about to start on my own Heinkel restoration I'm keen to hear about your experiences with this one. Good luck!

WELCOME TO MY BLOG ALL YOU FELLOW HEINKELERS

Thankyou for taking the time to look at my blog